Alcohol and STOMACH: How is the stomach affected by alcohol?

A reduction in alcohol consumption can undoubtedly be a good starting point, but is there any difference between different types of alcoholic beverages and is it really just about the alcohol content? This article draws attention to some of the effects that alcoholic beverages have on the gastrointestinal tract.

One in three suffer from consuming alcohol

Of those who suffer from IBS, more than one in three people state that they have moderate, severe or very severe symptoms after consuming alcohol. Few other foods cause as much inconvenience. Only cabbage, onions and coffee can really compete with alcohol when it comes to contributing to IBS problems. But is it really just the alcohol content itself that is the “culprit in the drama” for IBS patients when it comes to alcohol and stomach? The majority of the alcohol we drink goes quickly into the bloodstream (20% already through the stomach and the remaining 80% via the small intestine) and IBS problems belong in the large intestine. 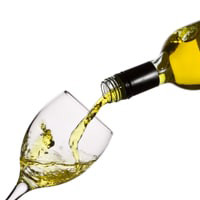 Effect on the throat and esophagus

The immediate effect of all kinds of alcohol consumed, regardless of type or strength, is that the muscles in the esophagus relax. It is also the pharynx, esophagus and gastric mucosa that are allowed to take the “worst shock” of the alcohol before it is mixed with other food/drink and eventually absorbed into the bloodstream. The mucous membranes in the throat and esophagus are irritated by the alcohol and together with the relaxed muscles (also an effect of the alcohol) increases the risk of acid reflux/heartburn, so-called reflux. A symptom that bothers many who drink alcohol – even those who do not suffer from IBS.

Effect on the stomach

When alcohol reaches the stomach, gastrin * and gastric acid secretion may be affected. This in turn can cause immediate or more prolonged damage to the lining of the stomach. Here, however, there seems to be a big difference between different types of alcoholic beverages. Fermented alcoholic beverages such as wine, beer, champagne, martini and sherry (with up to 5% alcohol) are the beverages that increase acid secretion (gastrin release) the most. These drinks have been shown to increase acid production up to 5 times more than control drinks.

What may be surprising is that other fermented but subsequently distilled beverages such as whiskey, brandy, rum and other liqueurs such as armagnac, calvados and cointreau with a higher alcohol content than 5% do not increase or even inhibit acid secretion. So it seems here that when it comes to alcohol and the stomach, it does not only depend on the alcohol content but it may be that the distillation itself removes the substances that so strongly contribute to the increased acid secretion. Alternatively, something is added during the distillation process which instead inhibits the acid secretion.

While wine can give a greater increase in gastric acid production than stronger alcoholic beverages, it has however been shown to have a superior ability to protect against certain negative bacteria such as the gastric ulcer bacterium Helicobacter Pylori and other pathogenic bacteria. This beneficial effect was seen to be significantly better than manufactured solutions of the same pH and alcohol content or other beverages such as beer, coca-cola or stronger spirits. Again, there seem to be more substances in the drinks that give a clear effect on the gastrointestinal tract directly or indirectly.

Effect on the intestines

However, the alcohol content itself has been shown to affect, for example, bowel movements, which also to a large extent affect the symptoms in many IBS patients. A relatively low intake of alcohol increases intestinal emptying and thus also increases the risk of diarrhea (due to impaired absorption of nutrients, water and salt) while a high alcohol intake instead reduces bowel movements and makes bowel emptying slower (constipation).

More factors than the alcohol content affect the stomach

In summary, it can be said that when it comes to alcohol and the stomach, there seem to be more factors than the alcohol content in wine, beer and whiskey that affect the gastrointestinal tract and different amounts of alcohol have exactly the opposite effects on bowel movements. Alcohol is obviously not a good drink to experiment with to affect gastrointestinal problems, but the general advice that is often given to IBS patients is handling food and drink with moderation and balance and to try their hand at diet but not with large fluctuations and this applies even for alcoholic beverages. If you discover that it is precisely alcohol that causes the increased problems, there are today a number of very good non-alcoholic alternatives.

Here you can read a comment and tips regarding non-alcoholic alternatives!

Systembolaget – Alcoholen’s impact on the stomach and intestines

* Gastrin – a hormone that is produced in the stomach and provides increased production of gastric juice with, among other things, hydrochloric acid.